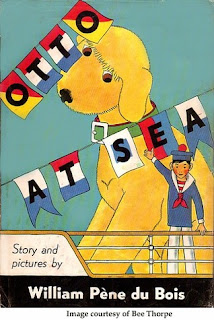 Before Clifford, there was Otto, (my favorite Otto adventure is Otto and the Magic Potatoes), an enormous yellow dog with an insouciant adult owner.  Insouciant is the word that I'd give to a lot of William Pène du Bois' characters.  For instance, the hero of The Alligator Case is a cheeky youngster who "masquerades" as a bellhop, a waiter and other hotel staff to discover the truth about the alligators that plague his town.  The fact that he actually works at the hotel does nothing to dispel his air of sophistication.

Pène du Bois illustrated his books and several books by other authors.  He won the Newbery award in 1948 for The Twenty-One Balloons.  And he garnered Caldecott Honors for Bear Party and Lion.

Let's talk about Lion.   This creation story makes a great tell-and-draw story with a little preparation.  The Foreman of God's Creation workshop decides after all these years to design a new animal.  He has a wonderful name for the animal - LION.  His original design is small colorful and an odd combination of animal parts.  Feeling uneasy with the design, the Angel approaches one of the other designers and asks "In one word, what is wrong with LION?"

So the story goes, with the Foreman asking designers the same question until the answer is "Nothing".

The Foreman takes the final design to the Big Boss (I forget how Pène du Bois designates God) and even God has input into Lion's design.
As much as I LOVE Lion,  Gentleman Bear is high on my list of Pène du Bois favorites.  Here is the opening.
..."Lord Billy Browne-Browne is an Englishman who lives mostly in London. He has spent the biggest part of his life with a teddy Bear. His bear's name is Bayard..."

A dignified beginning for the dignified story of a British peer and his dignified teddy bear. From boarding school to the 1936 Olympics, through marriage and into WWII, Billy Browne-Browne and Bayard are never separated.  The friends Billy makes in boarding school, the Teddy Bear Six, serve together in the RAF and their brave bears play a most important part in a flying mission.  Later, in the House of Lords, Bayard's wardrobe saves Lord Browne-Browne from having to speak.  And the whole story is illustrated by William Pène du Bois, himself. 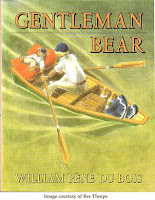 I am grateful for many things.  Reading the books of William Pène Du Bois is one of those things.
Posted by bookkm at 6:19 PM