Barbara Park (66) and Charlotte Zolotow (98) both passed away this week.  No more Junie B. Jones.  No more books like William's Doll.

I am grateful for the love and toil these two women poured into the books they wrote and edited over the years - for the laughter and joy and poetry and understanding they sparked in young readers.

Hooray for their lives!  Hooray for the gifts they have left behind!  And hooray!  Some of their readers will become writers and the legacy will continue.
Posted by bookkm at 9:21 AM No comments:

I so enjoyed Stefan Bachmann's The Peculiar last year that I was thrilled to find the sequel, The Whatnot, on the library shelves this month.

The faeries have been expelled from human London.  They and anyone who has anything to do with fairies are hunted down, jailed and executed. 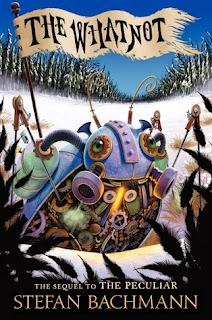 Street urchin, Pikey, knows that he has to keep his faery-plucked eye hidden. Somehow, he can see a different world and in that world he sees a changeling, branch-haired girl, wandering.  Then someone steals his eye patch and his attempts to hide this evidence of faery involvement land him in jail.

Meanwhile, in the faery domain, Hettie and her faery butler savior are struggling endlessly towards a cottage that gets no nearer.

Bartie and his friend from the House of Lords are searching for a door that will allow them to save Hettie.

Yep, time for some adventure, battlefields, weirdness, clever twists and sudden revelations.  Those revelations all have little clues leading up to them but the reader is still surprised.

I found myself skimming a little bit.  The emptiness of the fairy realm depressed me. So I glossed over some of the descriptions.  Don't do that.  I had to go back for the breadcrumbs that Bachmann dropped so I could understand what happened next.

Pikey, Hettie, Bartie and the young Lord, whose name I simply can't remember - poor thing, all come together with a bunch of faeries, some evil, some benign, in an attempt to stop bloodshed and treachery from destroying their world.  Whew!  Bachmann pulls it off.

I give this book four out of five stars.  In a sequel, the element of delight in a new setting wanes.  And the faerie world, caught as it was in its self-appointed King's power struggle, was bleak.   Those were the only complaints.
Posted by bookkm at 9:31 AM No comments:

Email ThisBlogThis!Share to TwitterShare to FacebookShare to Pinterest
Labels: book reviews, Stefan Bachmann, The Whatnot

On Saturday, (Dec. 16th, 2013), John Lithgow will present his one man show, Stories by Heart, at Zoellner Arts Center, Lehigh University.  I will be in that audience because stories are dear to my heart.

Members of the Lehigh Valley Storytelling Guild will tell their own stories from 7 to 7:30 pm.  (Not me.  I just want to listen this month.)

It will be a wonderful event.  Meet me in the lobby!

Posted by bookkm at 5:46 PM No comments:

Texting the Underworld by Ellen Booraem.

When I found myself tearing up this morning just thinking about this book - something the intended readers will most likely NOT do - I realized it deserved 5 stars. (Grades 5 through 8)

It's not like Conor doesn't have problems already.  He's short - so short that his nickname is Pixie.  He's scared of - oh, just about everything, but especially spiders. His father wants him to be a hockey player and go to BU; Conor, not so much .  His younger sister is a pain.  And now a 1600 year-old redheaded female banshee, who died when she was around 12, has moved into his game closet.

Conor knows a lot about banshees, thanks to his Grump who lives next door.  Grump is an expert on Irish mythology and obsessed with banshees.  So Conor knows that each family has a banshee and this girl is in his room waiting for someone in his family to die.

This is a complex book with details that make the characters fully realized.  The cause of Grump's obsession with banshees made me tear up this morning.  And that cause explains Conor's painful choice at the end of the book.  Problems with friends, the banshee's irrepressible personality, the mixture of world mythologies with present day technology - so many things add up to make this an enjoyable read.

Older readers may be touched by the impossible things Conor is forced to do - younger readers, too, perhaps.  But we can all be grateful that he has a cell phone and knows when to use it!!!
Posted by bookkm at 10:50 AM No comments: