There is simply not enough time to do all the stuff.  Housework stuff. Reading stuff. Blog stuff. Raising money for causes stuff.  Kid care stuff.  Spending quality time with all my family stuff.  Getting ready for the Kutztown University Children's Literature Conference Stuff.  CD release party stuff.  LOTS OF STUFF.  (I won't go into weddings, babies, etc.  I just won't.)

Instead, I will tell you what we did today.

D came over.  It's Spring break and her school decided that Spring Break is SACRED.  They will make up snow days at the end of the school year.

She brought two of her LOL dolls AND...oh my gracious!  An LOL BIG doll that her mother made out of D's out grown recital tights and other stuff. IS this not the most adorable thing you have ever seen?  Her name is Dawn and she is very closely modeled on the actual LOL doll named Dawn. 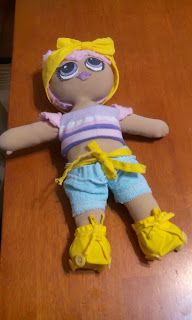 Poor Dawn ended up being the babysitter for two other LOL dolls and you-know-who.  You-know-who was up to his old tricks but then we remembered that he is good now so we introduced a new bad guy, Smunch.  Smunch flooded the school and all the aquatic stuffies - cuddlefish, frog and an LOL doll who developed the ability to swim under water indefinitely - had to save everyone.

However, bad guy-ness seems to be running its course.  Slime making, however, never grows old.  So, before long, D was seated at the counter and working with cornstarch and water.  That's it.  Cornstarch.  Water.  Oh, and a little food dye. 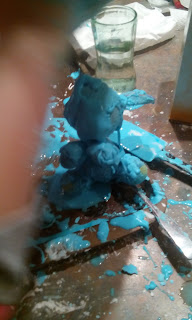 That is Little Blue Bunny - slimed.

I LOVE cornstarch and water slime.  We called it Oobleck and I bet parents and teachers still call it that.  When you get the right consistency - and finding that mixture is a big part of the fun -it is hard and dry to poke and touch.  Then you scoop it up and it runs through your fingers like ooze.

If you want a better idea of how much water and cornstarch you need, there's an approximate amount on Steve Spangler's Science website.

You can click to watch his video, but honestly, it's more fun to toss in cornstarch and stir in water til you get it right.  OK, about a box of cornstarch to 1 or 2 cups of water.  There?  Are you good?  Food dye is optional.  Considering that D an I still have blue fingers, we maybe should have skipped that part.

The glue and borax slime is actually a toy.  I end up wanting to save it for further use.  So I need to find a container and then the stuff sits on a shelf for months.  But oobleck?  Throw it away!  Let it dry up and toss it in the garbage.  Done.  And done.

Adam Gidwitz!  (sigh) His books are sooo good and now his writing concentrates on saving mythical creatures from capture - or worse!!!  Watch this.
Posted by bookkm at 3:47 PM 1 comment:

Immigrant Kids was my introduction to the work of Russell Freedman.  I had never read a non-fiction book that gathered archival photos and decoded the personal stories of children who came to the US from other countries.  And who could possibly resist that adorable round teary-eyed girl on the cover - and her stoic protective brother? 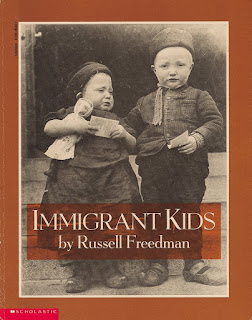 After that, I turned to Freedman whenever I needed to purchase a book about a particular era in American - or sometimes World - history.  His writing was precise.  His research was exhaustive.  His insight was measured.  I trusted him.

Publisher's Weekly's obituary tells us that his first published work was about teenagers, Teenagers Who Made History, published by Holiday House in 1961.

Freedman wrote about things that I am interested in; children and teens through various periods of history, cowboys, famous people.  How he always picked someone who piqued MY interest I will never know.  He wrote about American history, Native Peoples, Civil Rights, inventors.  He started his career with a series about animal behavior.

The man was a Renaissance writer.  I often led adults to his books on specific time periods because the writing is accessible but NOT simplified.

Freedman won a Newbery Award for his biography of Abraham Lincoln; Lincoln: a Photobiography.

You know what?  I have to stop writing now.  With over 60 non-fiction books - all written for young readers - to his credit, I should be content to let Russell Freedman rest in peace.  I am.  I am also very sad.

I won't forget him, Russell Freedman.

Posted by bookkm at 4:56 PM No comments:

Whoa!  That Sputnik guy!  Him, I like.  Sputnik's Guide to Life on Earth by Frank Cotrell Boyce.

So, here's the set up.  Prez is the human kid and he doesn't talk - out loud - because, um, something about his grandfather going somewhere and he's living with people who are not related to him.  Toys are related to everyone so this was hard for me to wrap my stuffing around.  But, let's just say, he's lonely.

So, one night at dinner, the doorbell rings and the family doesn't hear it - just Prez - BECAUSE, get this!  There is no doorbell.   Wha-a-a-T??!!

Prez goes to the door and there's this little "kid" with a backpack and he's wearing a kilt because it's all in Scotland and this little kid answers everything Prez thinks.

I know!  But that is just the beginning!

The family thinks the "kid" is a DOG!  An adorable, irresistible dog!

At this point, I am all "What is going on here????" But, the "kid" is an alien - from another planet. AND his name is Sputnik AND Prez is his "project" which means Sputnik is here to help Prez with his grandfather and loneliness and not talking-ness. 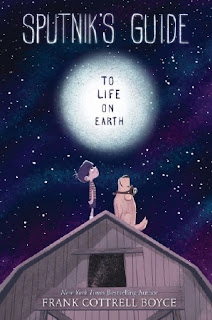 So a lot happens:
1. a toy light saber gets turned into a REAL light saber.
2.  A tree is destroyed.
3.  A tree is undestroyed.
4.  the remote control goes crazy and changes time and people
5.  robbery with menaces, I think.
6. disappearances.
7. running aways
8. a daring rescue
9.  Some lying
10. the threat of world wide destruction

And lots of other normal kid book stuff.

But that Sputnik guy!  Don't tell him to fix something because he FIXES it all right.  He just goes off and does his ET alien-y thing with all the trimmings.

He is a person without limits - just like me.

You want to read this book.

Shocked! I am SHOCKED!

Just a quick note to let you know that The Battle of the Kids' Books is DONE.  NO MORE!!!

For the past nine years, Bo(K)B has been my go-to guide for books that may have slipped under the radar. The consortium that chose the books always surprised me.  I have been forced to travel far beyond my comfort zone in reading.

So, now I feel a little lost?  A little forlorn?  WHERE DID YOU GO, OH BOOKLOVERS?

No more witty commentary from writer/judges and savvy, sassy Kid Commentators.  No more arguments in the comments. No More Battle of the Kids Books.

Is that a lone bugle I hear sounding in the distance?

Email ThisBlogThis!Share to TwitterShare to FacebookShare to Pinterest
Labels: Battle of the Kids Books, shock

My introduction to Zilpha Keatley Snyder came when I landed at the Parkland Community Library in South Whitehall, PA - 1988.  Her Green Sky books sat on the crowded shelves.   I started with Below the Root and LOVED it.  In 1984, Snyder adapted these books into a video game to allow the story to continue after readers objected to the conclusion to the third book, Until the Celebration.

I was very much into science fiction and fantasy books.  These three books, about a race of people who lived their whole lives in, below, and on trees delighted me.

Then, I read The Headless Cupid, The Famous Stanley Kidnapping Case, Blair's Nightmare, and  Janey's Private Eyes.  I have wanted another Stanley family book ever since.

Snyder died in 2014.  Her website still displays her last post, written right after the publication of William's Midsummer Night Dream.  She wrote 46 books and I read at least 20 of them.  Her books swung from complete fantasy to modern day tales of trial, and sometimes, mystery.  Some of her books had a touch of magic realism.  All the books that I read were page turners.

Two of her Newbery Honor winners, The Egypt Game, and The Headless Cupid were set in modern day, and absolutely radiated suspense.  The Witches of Worm, I hesitate to say, I never read.  What?  A fantasy, the story centers on a kitten that may actually be an evil demon.  Nooooooo!

It's time to revisit this acclaimed and talented writer.   I have about 26 books to catch up on.  Let's not forget Zilpha Keatley Snyder.