So, this week I am early.  Last week KBWT did not even happen. So, stop complaining ;)!

I can't remember how I stumbled across this superb story time website.  The Wielded Pen is amazing and I know I will use it again and again.  Here you will find story time plans for public and school librarians all complete and ready to use!!!!  The blogster, Dorothy, does such a wonderful job, too.  Preschool teachers, Sunday school teachers and homeschooling moms will also find The Wielded Pen enjoyable and useful.

And excellent children's book reviews are a major part of this blog.  So check out The Wielded Pen today.
Posted by bookkm at 3:35 PM No comments:

Well, last week my Dad reached the grand old age of 90.  (Cheers deafen the blogger as she grins.)  And as oldest daughter and avid amateur party-planner, I took the helm and planned an awesome party for my Dad for last Saturday.  (I also had a ferocious head cold that evolved into an upper respiratory infection.  But, who cares about that?)

So, here are some things I learned in the process:
1.  Don't count on a 90-year-old to show up for his own party.  He did not show.  As a matter of fact, he ended up in the hospital for emergency surgery the very next day.  Some people will do anything to avoid a party!!!!
2.  You can add diacritical marks to a Pages document just by holding down a couple of keys.  I've already forgotten what those keys are but now that I know it can be done I will find the instructions.
3.  Those "Help" windows are actually helpful in many, many programs.
3a.  Use those "Help" windows.  Staring at a computer screen will not get the job done.
4.  The best ideas are hatched right before the party when there is no time to implement them.  For instance, Face Sudoku - thanks to my sister CG.  There are 9 siblings and 9 numbers in Sudoku.  Just substitute a different face for each number and there you go.
OR, slide photo Bingo.  Make Bingo cards with photos from the event's slide show and everyone will be sure to watch the slide show very carefully.   (My family LOVES slide shows.  Our spouses - not so much!)

But, now, my Dad has another hurdle to overcome.  Just how he will get back to charging the net for a backhand return, I don't know.  He won't be playing tennis anytime soon.

5. The last thing I learned is this.  Time is finite.  Don't waste any of it.  90 years seems like a loooong time but it is never long enough if you love someone. 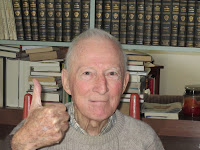 If you hold a seed Book Trailer

This artwork is awesome.

If You Hold a Seed by Elly McKay.  Running Press Kids.  You can pre-order it now.
Posted by bookkm at 3:55 PM 1 comment:

In Search of Goliathus Hercules

In Search of Goliathus Hercules by Jennifer Angus.

Henri (pronounced Henry) Bell has been sent to live with his Great Aunt Georgie in America while his mother searches for Henri's lost father in the jungles of Malaysia.  At Great Aunt Georgie's home, Henri discovers that he can speak with insects!!

This amazing talent - and his mother's failure to find his father - sends Henri on an odyssey.  He will work and raise money and go search for his father himself.  And in the meantime, he will also find the elusive, giant, mythical insect - Goliathus Hercules.

But his Great-Aunt's evil neighbor, Agatha Black, is chasing Henri to Henri's great confusion and fear.

Set in late the late 19th century when scientific explorations were viewed with as much anticipation as first run movies are now, this book has everything - circus sideshows, weird talents, fascinating insects, nascent science, formal correspondence, disguises of all kinds, good friends and a baffling, creepy evil-doer.

The ending leaves the door- or window - wide open for a sequel.  Here's hoping we get to see Henri in action again.

(I know I promised to you earlier this week.  *cough, cough*  I have been sick. *snort, snuffle, cough, cough, cough*)
Posted by bookkm at 7:48 AM No comments:

If you need suggestions for the younger set, check out my Books for Quiet Times list.  The list was put together during the holidays so many of the books have a snow theme.  But children's classics, like A Bear Called Paddington, and A Cricket in Times Square, or The Saturdays by Elizabeth Enright are perfect for snow days.
Posted by bookkm at 7:34 AM No comments:


Kid's Book Website Tuesday, everyone!!  Remember those posts?  Well, I am trying very hard to return to a regular posting schedule.  Today is Tuesday so....

The site is designed for grown-up people but having another blog to guide me through the labyrinth of children's books is always useful.  Check it out.

Somewhere during the past three days I visited a site with book related games and quizzes and graphics and animations on it and I said to myself, "Self,  THAT's a good site for KWBT."  Lucky for me, I bookmarked it.  Here it is!!

LEGO Books Fun Stuff from DK Books!  What's not to like?  It's LEGO; it's books!  Create your own LEGO character mash-ups.  Download coloring sheets and games.  Watch videos.  Buy books.

If you stroll around the DK site, you'll find other fun stuff to do.  DK offers all kinds of awesome, visually appealing, accessible and informational books for children and adults.  Enjoy.
Posted by bookkm at 6:37 PM No comments: 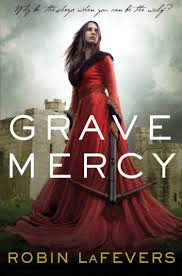 The books I read on the cruise:

Grave Mercy by Robin LaFevers.  Great news!  The sequel to this book, due out in April, has been announced, Dark Triumph.

This series revolves around a convent dedicated to the god - or saint - Mourtain, Death!  As Brittany struggles to maintain independence against onslaughts from France, the nuns and novices of this abbey learn arts of subterfuge and murder.  Our heroine, Ismae, is Death's daughter.  This may be a metaphor for the circumstances of her birth, or it may be truth.  She is trained to be an assassin and her specialty is poisons.  Poisons have no affect on her.

At the age of 17, Ismae is sent to the Duchess' court to kill the man Duval, supposedly a traitor to the Duchess.  Oh, if only Duval was not so honorable, so righteous, so immune to her charms and so awesomely handsome!

The themes of women as objects, pawns in political negotiations, and victims of physical and sexual abuse underline the strategy and subterfuge of this novel.  LaFevers' writing moves the reader right into the plot.  There is plenty of treachery, here, plenty of doubt, plenty of action, and enough romance to quicken the pulse from time to time.

It looks like Dark Triumph will follow the adventures of another novice, the dark unpredictable Sybella.  Good.  She has an important role in Grave Mercy.  I hope her story ends well.

Check out LaFevers website to find out just how much of this novel is set in history and how much is fiction.  Fascinating!


I also read;
Return to the Willows by Jacqueline Kelly
In Search of Goliathus Hercules by Jennifer Angus
Froi of the Exiles by Melina Marchetta

And a get-healthy book and some magazines and ...that's about it.

Tomorrow, I will review Goliathus Hercules.
Posted by bookkm at 9:28 AM No comments:

Battle of the Books Brackets have been chosen.  I knew there was a good reason to return to the land of ice and wind and Internet access.  i just knew it.

Once again, I have read some, but not all, of the books.  I have direction!  I have purpose!  I have a goal.  I love Battle of the Books.

Now, the brackets are chosen BEFORE the American Library Association announces their Book Award Choices - which ALA did last Monday right before I re-learned body surfing on a Caribbean beach.

For the complete ALA approved list of Newbery Award winners, here you are.

To check on all the other awards - for best children's non-fiction, or YA book, or social justice book, concept book, go to the ALA Book Awards page and click on the individual links.  There are just too many great books written for young people.

If you go to BoB's current post, you will see how well the Brackets match the ALA Award winners.  As always, judge's comments and the Peanut Gallery responses will be some of the best blog-reading of the year.

Oh, I wonder when we get to vote for the Undead.  Or, gasp, has that vote been cast?  And who will be this year's awesome author/judges?  So many questions!  So many books!  So little time!  Excuse me, I have to put books on hold at the various libraries of which I am a member.
Posted by bookkm at 7:54 PM No comments:

It is cold here.  I just returned from 10 days of sunshine and heat and now I am cold again.

Back to work.  Back to worrying about people and what they think and what they do and if everyone will be ok and happy just for a little while.  Back to making our dinner and washing our clothes and tomorrow, sigh, no one will straighten out our sheets and fluff our pillows when I go off to work.

While I was gone, I didn't waste time wondering why this family member or that did this thing or that.    I was so far away, I could do nothing about anything and so the worry drifted into the tropical sky.

But I am back in the cold, where requests I make are frequently, though understandably, ignored and people I love grow old before my eyes.

Sigh.  Vacations are necessary but returning can be hard.  Just wait.  By next week I will have many good things to say.

Posted by bookkm at 7:34 PM No comments: