I WON! I won a book from Free Book Friday. I can't even remember what the book was, since I was notified two days ago but it was FREE and I WON it. OH! It was Love the One You're With by Emily Giffin. It looks very, very hip and intriguing. FREE FREE!!

Free Book Friday offers a new book every week - sometimes the email doesn't get to me until Saturday but who cares - with reviews and author interviews and other cool book related stuff. And every week, you can sign up to win that book! They have a Free Book Friday for Teens, too.

And that brings me to my favorite book related e-newsletters or websites.

For kids, I love Kim Chatel's website, Chatel Village. Kim offers reviews of blogs, books, YouTube videos and other very cool stuff. Her own blog is full of great parenting and kid-friendly ideas. Kim is an author/illustrator.

I have mentioned Shelf Awareness before. For a look at the independent book-selling biz, Shelf Awareness is where the action is. Publishers post a lot of ads on this site as well, so subscribers get a chance to see reviews, ask for advance readers' copies, and hear the publishing buzz on the new books FIRST.

Suzanne Beecher does Read It First for St. Martin's Press. I have found at least three very good books from this free daily email since I joined 3 months ago. Suzanne also does Dear Reader, a series of online book clubs that can be accessed through your public library's website. The Parkland Community Library offers 3 of these book clubs. (Go to Adult Services and click on Online Book Clubs in the drop down menu.) This is a fuss-free way to find your next good read. And if the book of the week doesn't appeal to you, you can just delete the posts for that week.

I also subscribe to publishers' children and teen newsletters. These weekly or monthly updates help me keep up on what is new for kids and teens. Next post will talk about websites and blogs from authors, publishers and booklovers.
Posted by bookkm at 7:22 PM No comments:

Tally Hamilton hates the idea of going to a boarding school. But Hitler is gaining strength in Europe and her father wants to protect her. When Tally is offered a scholarship to Delderton School in Devonshire, Tally has to go. It is the beginning of wild adventures that take her into the European Alps. She and her fellow Deldertonians make friends with children from all over Europe. With their new friends' help, the Deldertonians rescue a prince, elude spies and the Gestapo and find out who they are - who they truly are.

And there is a still pool and clouds of dragonflies. This is a book about trust, friendship and the power of doing good. But enough about all the message-y stuff. This is an exciting page-turner of a book. So read it.
Posted by bookkm at 12:44 PM No comments:

When I was growing up, my parents opened our house to many, many people. Two of them lived with us for about three years, our foster sisters, Raisa and Mayra Godin. Their parents finally got out of Cuba and came to live in Bethlehem and Raisa and Mayra went on to have lives that didn't include sharing the bathroom with seven other children.

Last weekend, Raisa and Mayra's father, Roberto Godin, died. He lived in Bethlehem with his wife for years, until she died and then he lived in Delaware with Mayra and finally in Philadelphia with Raisa. So where should they have the memorial service?

They chose my parents' living room. So tonight I joined some of my siblings, my foster sisters, their spouses and children, their cousins and aunt, their in-laws, their high school friends and even a nurse from Roberto and Amy's doctor's office to remember a man who loved his family fiercely enough to send them to freedom. If he had not had the courage to do that, I might have had different foster siblings - or none at all - and my life would have been poorer.

It was a lovely memorial service and it was a wonderful meal afterwards, eating my Mom's lasagna and her eggless-milkless chocolate cake and sharing stories, memories and making new friends. 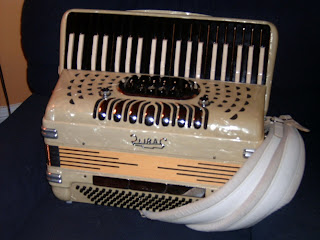 Something new! I will now add a photo of YTBN.

Isn't she pretty?? Her keys are a very very dark brown. I think they are supposed to be black but they look like dark chocolate. Hmmmm.
Posted by bookkm at 8:57 PM No comments:

Email ThisBlogThis!Share to TwitterShare to FacebookShare to Pinterest
Labels: accordions

YTBN is officially mine. So, of course, she has decided to balk. Two of her reeds have become uncooperative and she has to go back to the accordion fixer at the Accordion Gallery . I talked with Guenadiy Lazarov, the owner of the Accordion Gallery and YTBN's former owner, and he's sure it is a minor adjustment.

But YTBN - and someday I will know her name - is so versatile, all I have to do is combine sets of reeds or switch sets of reeds and I can play.

If I could remember where I put my camera I would post a photo here. Soon.

I have been reading - a lot. I finished the latest Jacqueling Winspear, Among the Mad. It was about terrorism among the discarded WWI veterans in England. Maisie Dobbs is a thoughtful protagonist. I love the setting of London and its surroundings in the 1920s.

I finished a great teen fantasy by an author named Stiefvater, Maggie Stiefvater. The title is Lament : the faerie queen's deception. Right there - fairy spelled f-a-e-r-i-e - that's a draw from the getgo. But the REAL hook is Luke Dillon, the dangerous, non-human immortal incredibly hot guy who woos the heroine Deirdre Monaghan, best known for her celtic harp playing and her tendency to hurl right before she plays in public.

Luke may not be Edward Cullen but they are close cousins. Luke's past is way worse than Edward's and he reforms just for Deirdre. Some juicy kissing goes on. Some clever manipulation of the "rules" of magic. Some negotiations among the various magical peoples. But Stiefvater leaves enough questions unanswered to open the way for a sequel. For instance, how did Deirdre's aunt end up with her sister's talent in singing? Hmmm???? And is Deirdre's aunt a danger to Deirdre since she has already made a bargain with the sidhe? The back cover announces a second book due out in the August, Shiver, but it has nothing to do with Deirdre and Luke - or Deirdre's best friend, James who is a hunky bagpiper. NO! Ms. Stiefvater, I protest. I want to know more about Deirdre, and her magical and non-magical friends.

What else? The New Policeman by Kate Thompson has been on my mind for a few weeks, since I read it.. More magic, more celtic music but no accordions, alas. Lots of Irish mythology, though, since the story is set in modern day Ireland and the mythical land of Tir Na Nog. J.J. is a teen whose family is known for its musical ability. But lately, no one has time for the arts. His father, a renowned poet, has not written anything in months. Just getting the hay in and running the farm is taking every second of his days. When J. J.'s mother asks for more time as a birthday present, J. J. decides to find out where all the time is going. The new policeman shows up - or not - in a random way that makes it pretty obvious that he's not a normal gardai. Every chapter begins with a piece of fiddle music. This is a lovely piece of fantasy.

I have off tomorrow. I will get my hair cut. I will dip peanut butter eggs in dark chocolate. I will listen to Jesus Christ Superstar. Good night.
Posted by bookkm at 8:32 PM 1 comment:

I am in the process of "upgrading" to another accordion. (I first typed in "better" but that is not fair to my first accordion, who has been a good faithful instrument.) This is NOT an April Fool's Day joke, honest. In my house there are now TWO accordions, my increasingly tamer accordion, Silvano, and the New Kid in Town - possibly - yet-to-be-named (YTBN).

You all know Silvano. He's black and silver and has two sets of reeds and slightly smaller than standard keys but 120 bass buttons. YTBN is white - well, actually cream, and her keys are backwards. Her "white" keys are black and her "black" keys are white!!! I bet that was the height of cutting edge when she was first assembled! Her keys are about the same size as Silvano's but YTBN has THREE sets of reeds, 120 bass buttons and a built in microphone in case I want to deafen half of Northside Bethlehem some time.

I love Silvano. I know Silvano very well but.... for expressive dynamics - well, he lacks poetry, if you know what I mean. YTBN on the other hand, sigh.....I am getting a superior accordion crush on YTBN. Her bellows respond so well to changes in pressure. Whew...she's a beauty.

YTBN has a problem though. Bellows odor. Yes, YTBN has BO. I suspect that she has just recovered from being locked away - for years - somewhere musty and possibly damp and the stiff material from which her bellows are made has absorbed a strong smell, like old stone walls. It is this problem that has me waiting a week before committing to purchasing her. A liberal sprinkling of a carpet deodorizer has lessened the damp wall smell but not removed it.

YTBN and I have a lot in common. We're probably the same age. We are both women of character and attractive in unconventional ways. I think, we could have a long, serious and mutually beneficial relationship - if we can conquer the BO problem.

If you have a fool proof way of removing musty smells from items that can't get wet, please let me know.

I will try to get photos up of both of these accordions. I hope Silvano isn't jealous. Sibling rivalry among accordions... He has a much nicer case. That should count for something.
Posted by bookkm at 9:45 PM No comments: