Today is Tellabration!(tm)  I am so excited.  You can join us at Trinity Episcopal Church in Bethlehem, PA, 18018, tonight for a lovely evening of adult storytelling - classy, elegant tales. 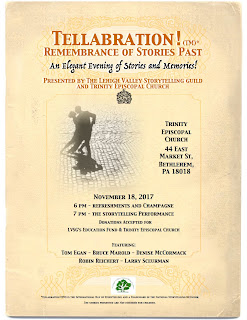 Storytelling Workshops - All Over the Valley.

I will be busy this summer.  I am doing TWO workshops at Moravian Academy's summer camp.  These workshops are open to MA day campers only.

AND I will lead a workshop for elementary school kids at Allentown Public Library and one for teens at the Emmaus Public Library.  More info here.

Hey, teller friends, I am now helping out with the Lehigh Valley Storytelling Guild's webpage.  Please visit there for up to date LV storytelling news


The Good, the Bad and the Ugly of Storytelling:

The Good:
You are the STAR!  You don't share the stage or the audience with anyone else.

The Bad:
You don't share the stage or the audience with anyone else.  If things go badly, there's no one else to blame.

The UGLY:
You are responsible for your story choices.  Stories can heal  - or hurt.  Tales can sooth - or incite.  Your story choice can teach or confuse.  It is up to you.  Storytelling is fun but it is NOT a game.

Thanks so much to Camp Touchstone for letting me tell to 14 kids and assorted adults on Thursday morning.  I told the Gunniwolf - one of my FAVORITE stories of all times - and a Burmese story the name of which I forget but I call it "A Drop of Honey".
And we played a game I created called Silent Moves:

Place a collection of small items on a large bandanna or small tablecloth.  Here are the rules:

1.  After a short period of silence - (ask them to count to 30, for instance) - any player may move one of the items to another place on the cloth.  Play continues from there.
2.  If two people move at the same time, neither can complete the move.
3.  Once an item is moved, it must stay in that space for the next move.  In other words, if player A moves Item 1, no one can move Item 1 until another item has been moved.
4.  Players MUST be aware of the players around them.  The whole group should make sure that every player gets to move something.
5.  The leader can intervene to make sure everyone gets a chance to play.

The game should have a set time limit since it is open-ended.

After the game is played, ask questions:
What did you see happening?  Was there a pattern in any player's moves?  Did anyone work together? What were you trying to do?

This is an observation game and it is amazing to watch and wonder as the players move the objects from place to place.

The Lehigh Valley Storytelling Guild is looking for young tellers between the ages of 7 and 17 (ish) to form a corps of young tellers.  Do you like being the center of attention?  Do you love using your imagination?  Do you gobble up every story you can read or hear?  You might want to join our Young Tellers group.  First job?  Come up with an awesome name for the group!  Second job?  Tell stories!
Reply to me, Karen Maurer, in the comments if you have any interest in learning to tell stories.

Trip down Memory Lane:  (I am keeping this video here for awhile. )

Love this video.  Miss these guys so much.  Eric and Kelly from the Teen Tellers.

GAMES!!
First Lines, Last Lines.  Ages 9 and up.  ( (c) KEM 2012)
You will need pencils and paper
Note:  Players should have some idea of what makes a good story.  Most of us know this intuitively - especially if we listen to or read a lot of stories.  You might want to wait until your players have heard a few good stories before they play this game.

This is a writing game that will increase improv storytelling skills.  Each player writes an opening line.  Opening lines should introduce at least one element of a story, such as a character, a setting, a mood - even a problem - or a combination.
SAMPLE:  "Once in a deep dark valley, a rabbit wished he could talk."  Believe me, your players will do better than that.
Toss the opening lines into a pile in the center.
Now players write an ending line.  The ending line should wrap things up nicely but should also include something that makes it less generic than "They lived happily ever after".  "They lived happily ever after in their house made of scissors" makes a better ending.

Now, each player - or small team of players (two is best) - picks a first line and a last line from the pile.  Make sure they don't get their own.

And they write stories that link the two.   The story should include the elements in the first line AND explain any oddities in the last line - such as the scissors in the example above.

Give the players plenty of time to develop their storyline.  15 minutes minimum.
Then invite them to share their stories.

Variation 1:  Ask the tellers to write just last lines and to make those last lines as descriptive as possible.  Now, play the game.  ((c) KEM 2009)

Variation 2:  Instead of writing beginning and ending lines, players can create different elements of stories such as; a main character, a problem, a setting, an antagonist, a solution, a weakness, a strength...The list can go on and on.  Then each player must collect one of each element and create a story from them.  How about adding a refrain?  or a magic chant or a talisman?  a familiar, a favorite sport?  Like I said the ideas could go on forever.   (I found this game online several years ago.  The additions are mine of course. If I find the source, I will let you know. )

Count! Featured in Children Tell Stories, this simple game encourages the use of tone of voice, gesture, body language, and facial expression to tell the story.

Give the players a list of ways to count...as if they are counting footsteps in the dark, or fireflies, or mice, or counting to keep their temper, or counting a boxer down for the count, or....
Each player chooses one way of counting, without telling the other players which one he or she chose.
Each player counts out loud to ten - as if she is counting whatever she chose.
The other players must guess what that player is counting.
The ONLY thing the players may say are the numbers from 1 to 10.  NOTHING ELSE.  Everything else has to be communicated through gesture, facial expression, and tone of voice.