Too much and Rumer Godden

I have been thinking about Rumer Godden's children's book, The Diddakoi.  Kizzy is taken in by a  single woman of just comfortable means when Kizzy's grandmother dies.  Kizzy has to adjust to the lives of "normal" British people after living in a gypsy caravan all of her life. 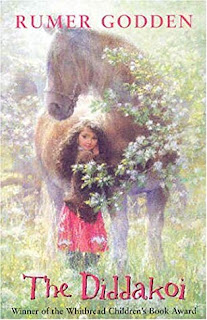 I don't remember all that much from the book. The woman who took Kizzy in was sensible and kind.  She was also frugal with the money she spent on her young charge. Kizzy had three outfits for school; one to wear, one for the wash, and one, just in case. THAT is the thing that keeps jumping to my mind.

A child doesn't need more than that; I remember that was the argument.  Children grow too quickly to lavish them with clothing they do not need.

As I move through the absolute chaos in my office made of THINGS, THINGS and more THINGS., as I search for that shirt in my closet or attempt to organize my scarves and my costume jewelry, I remember - three outfits; one to wear, one for the wash, one just in case.

Times were simpler then. The Diddakoi was first published in 1958. Clothing was not as cheaply made or readily available. Styles for children did not change rapidly until TV ads hit the airwaves. Hand-me-downs were normal, not a source of shame.

Still, imagine a world where even comfortable people purchased with restraint and used their money for only the things they needed.

The economy might collapse. OR we might find ways to cope with less things in our homes, in our landfills, clogging our waterways, wasting our money and ruining our happiness. We might use our money to fund education, the arts, science and health innovations.  The mind boggles.

One to wear, one for the wash, one just in case.  I'm not brave enough to try it - yet.

Posted by bookkm at 8:16 PM No comments:

Kevin Henkes and the inevitability of change

I just - JUST- closed Kevin Henkes' book Sweeping Up the Heart, (contented sigh).  So calm, yet so dramatic, I got what I expected from Kevin Henkes, who is one of the best authors and illustrators out there.  Also, rabbits. 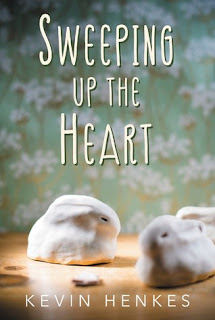 I read somewhere that Kevin Henkes - who has written and illustrated lots of books about mice and kittens and rabbits - has taken to sculpting small rabbits from clay.  I can't find that interview so maybe I dreamed it up!  No matter.  Amelia, the hero of this new book, sculpts animals of all kinds and in this book, she concentrates on rabbits.

The book is about emotions, not clay rabbits, - especially the emotions of confusion and sadness.  And the book is about communicating with all kinds of people.  It covers a few days of Spring Break, meeting and making a new kind of friend, seeing adults in new lights, appreciating what has always been and worrying about the future.

The set up is simple. 12-year-old Amelia lives with her father because her mother died when she was only two.  Her father seems uncomfortable in his own skin, perhaps because of this great loss. They are lucky that their neighbor, Mrs. O'Brien, is there for them as housekeeper and friend.

During this Spring Break, Amelia runs to the clay studio, her home away from home, and meets Casey, the studio's owner's 12-year-old nephew! A new friend and a new kind of friend, Casey introduces Amelia to the idea of "signs" and he points out a red-haired woman as a "sign" for Amelia.

This red-haired woman ends up being more important than Casey or Amelia could imagine and not in the ways they both hoped.

Quiet, calm drama - no action scenes, no high-impact blow-ups, pulled me effortlessly along to the last page.  Read it.

I do have afterthoughts.

When I was 12, I had an insight so profound that nothing before in my life prepared me for it. My life was devoid of trauma. The most disrupting thing that ever happened in our life - I mean permanently re-arranging - was the arrival of a new sibling. That happened with such regularity that by 12, I was no longer excited by yet another kid. There were 6 of us by then.

Still, the emotions that Amelia feels; the magical possibilities, the sudden appearance of adults as people with unexpected facets, the realization of change as a constant, - I felt all of those things with aching force.

But without that trauma, or other upsetting traumas, such as moving to a new home, the end of a friendship, a divorce in the family, the death of a beloved older relative, - without a life altering trauma to initiate the plot, can an author write effectively about these emotions? I mean SOMETHING has to happen in the book. Something has to change. Without a missing mother, that red-haired woman would have had little or no significance to Amelia or Casey.

Of course, other things do happen in this book. The sculpted rabbits, the friendship with Casey, Casey's home situation, - in themselves they do not make a compelling story line.  It is that one fact of Amelia's person-hood, her motherless-ness, that moves everything along.

I am sure that someone has written a book that displays this time of change in a pre-teen's life, in a stable family without a huge catastrophe, effectively and well.  And I suspect that I probably read some of those books. Still, a major shake-up grabs the reader's attention.  That is not a bad thing.

A sudden afterthought:  If the reader is a more literal person than I am, will he/she relate to a character whose situation is so very different than his/her own?  Just wondering.

LBB is ACTUALLY a Squirrel

After I wrote this, I realized that my loyal readers already KNOW some of this stuff - because of LBB's little sister, Snow.  I feel that the subject should be enlarged on because stuffie space travel is a little known and very risky venture.

How this happened is a little known phenomenon of stuffie space travel.

Nutsa and Acornio Acorn, Little Blue Bunny's parents, are Stuffie-World Renowned Astrosquirrels.  They have explored the planets of Bunnyvania and Foxler.  Their next mission might be to the underwater world of Oceanslovakia.  Not right now, though. Nutsa is expecting child number ??.  I lost count after Foxleer - he's soooo cute!

Nutsa took the first trip by an expectant squirrel mother to Bunnyvania - EVER.   Space travel can effect things like being pregnant, so Nutsa ended up giving birth to Little Blue Bunny on Bunnyvania.  She was not due to have her squirrelkin for several days.
It was a Universe-shaking event because this had never happened.  And when Little Blue Bunny was born, well, his parents were very, very surprised.  They were so surprised they insisted on tests to make sure they got the right baby. 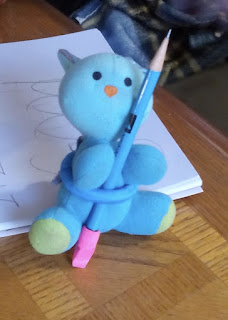 Here's the thing.  No one, not even the residents of Bunnyvania knew this.  Bunnyvania has other creatures living on it - not just bunnies.  Their offspring look like the parents.  They must have some kind of inborn resistance to the bunny-shaping atmosphere.

Until the Acorn family made medical AND space travel history, no one knew of this odd result of entering Bunnyvania's atmosphere.

Soon after Little Blue Bunny's birth, Nutsa and Acornio went to the planet Foxler, and wouldn't you know it?  Foxler has the exact same problem with the atmosphere.  That's why Felina Fairyfox is a member of the Acorn family.  The latest member of the Acorn family is Foxleer, a cute little fox boy - see his photo above.  I think that Nutsa should give up space travel and concentrate on fashion design.

And don't forget that about a year ago, Snow was born on Bunnyvania, too.

Nutsa is actually expecting another baby.  D held a "gender reveal" party two weeks or so ago and the baby is a girl.  (Sigh).  Also, the baby will be born at home so, no surprises there.  D let the twins, Chester and Pinella, pop the balloons to discover the baby's gender.  (I should probably say "birth gender" since gender is more than just anatomy.)

Needless to say, with her previous experiences of traveling to other planets while expecting, Nutsa does NOT want to deliver her little girl early on an underwater planet - just in case.

I never knew that stuffed animals - oh wait, Nutsa is actually made of terra cotta - anyway, I never knew toy animals could have such colorful secret lives.

So, we performed our pieces three times - once at the opening, once again in January where the performances were videoed and yet again this Spring individually - for a more professional audio.

Here is the video of the second performance.  I was so nervous and you can tell in my singing.  But Andrei supported me like a trooper.

I try.  I do.  I'm happy that there is probably a better audio out there of both the speech and the song.


Visit Nuture Nature Center of Easton's YouTube channel to watch the other poets and speakers.  They are wonderful.